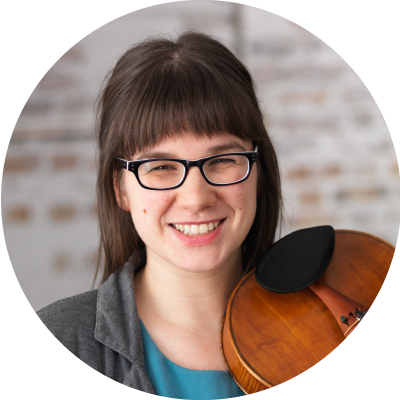 Born in Aberdeen, Kay Stephen is violist with the Gildas Quartet with whom she has performed widely around the UK and Europe, live on BBC Radio 3 and has recorded for the Champs Hill label. The quartet are currently City Music Foundation Artists and Junior Fellows in Chamber Music at the Birmingham Conservatoire.
She also is also violinist and violist with the Jacquin Trio with whom she won the Royal Overseas League Competition last year.

Kay has appeared as guest violist with the Elias Quartet and the Edinburgh Quartet as well as playing regularly with Ensemble Deva, resident ensemble of the Storyhouse, Chester, and the recently formed Manchester Collective.
She has been invited as guest co-principal violist with the BBC Philharmonic Orchestra and as violinist with orchestras including the Royal Northern Sinfonia, the Halle, the BBC SSO, Red Note Ensemble and the RLPO.
In 2015 she became a member of Manchester Camerata with whom she performs frequently as principal violist and soloist.

Kay is looking forward to joining eleven-piece, cross-genre ensemble Propellor this Autumn for the continuation of their residency at Snape Maltings.